This article was published on March 13, 2019 on BenefitsPro written by Max Nisen.

The health-care policy environment is shifting in a dangerous way for insurance giants. A seemingly small change in how drugs are paid for could be the beginning of a response.

UnitedHealth Group Inc., the largest U.S. health insurer, announced Tuesday that its pharmacy-benefit management arm OptumRX will mandate that all new employer health-plan clients pass the drug discounts it obtains for them directly to plan participants. That’s a big shift from the current system, under which OptumRX and other PBMs negotiate prices with drugmakers and hand the resulting rebate checks to clients to use as they wish. PBMs profit from this arrangement, and have an incentive to favor heavily rebated drugs. That pushes drugmakers to hike prices, and patients are exposed to artificially inflated costs.

UnitedHealth’s new policy means lower drug costs for more people. But it has broader implications. It smartly preempts Trump administration efforts to reform rebates, and shows that the industry can make needed changes ahead of pushes for an even bigger government-led overhaul of the way they do business. 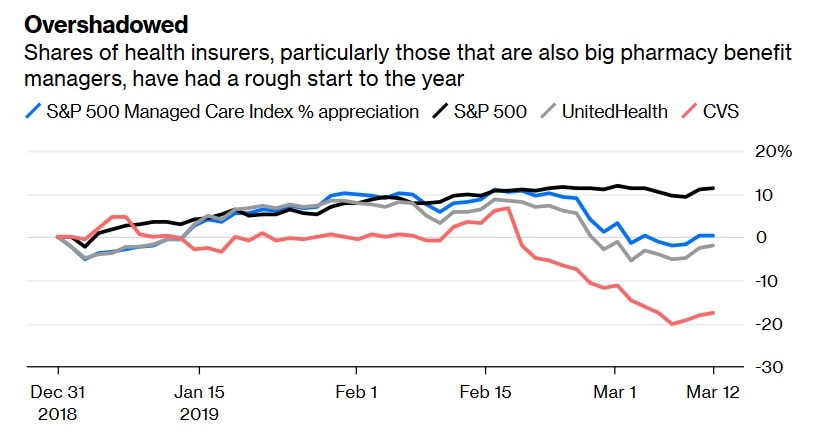 Increasing costs and unhappiness with the status quo are motivating the administration’s regulatory effort to end rebates in Medicare. It is also thinking about forcing insurers to reveal the hidden prices they negotiate with hospitals, which would wreak havoc on their ability to negotiate. Consumer dissatisfaction also behind broader reform efforts championed by Democrats, such as Medicare for All. Such plans are distant threats, but they are present and existential enough to weigh on shares.

Making the switch to so-called point-of-sale rebates for new clients is a big and unique step for UnitedHealth, and it builds on its January transition of a different subset of its business. While the impact will be small at first as existing clients can stick to the old system, the new model could eventually impact as many as 18 million Americans, according to a research note from Royal Bank of Canada analyst Frank Morgan.

UnitedHealth says people already on its point-of-sale plans save an average of $130 per eligible prescription and that medication adherence is up by as much as 16 percent. People are happier and healthier when they can afford to take their medicine, and are more likely to avoid larger medical costs down the line.

If the administration’s efforts on rebates succeed, UnitedHealth will face less disruption and have more experience in making a new business model work. Slower rivals such as CVS Health Inc. and Cigna Inc’s Express Scripts – which offer point-of-sale rebates as an option but don’t mandate it – may suffer. Already in February, CVS attributed part of its weak 2019 guidance to the impact of shifting drug-pricing trends on its PBM as drugmakers held back on price hikes under political scrutiny.

Plans that offer point-of-sale rebates have a chance to focus more on reducing overall costs for both patients and payers, especially when integrated with an insurance plan. This isn’t going to make insurers and PBMs beloved overnight, or produce instant systemic cost-savings. But UnitedHealth is taking a needed and bigger step toward a better and more patient-friendly system.