The only ‘lean’ at CT Spring & Stamping is process

Article written by Gregory Seay as seen in HartfordBusiness.com on September 19, 2016 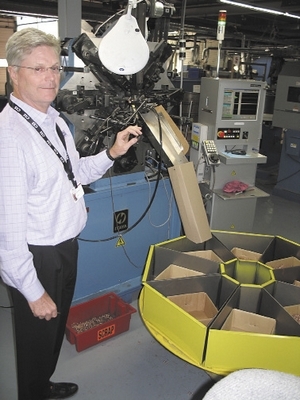 In its 77 years as a manufacturing “job shop,” Connecticut Spring & Stamping in Farmington has cultivated a varied 700-client roster.

They range from makers of drug-delivery instruments and other medical devices to automobiles and guns, many of them long-standing relationships, burnished by CSS’s mantra of a strong commitment to quality, says President William “Bill” Stevenson.

“We’re just fortunate we’re growing,” Stevenson said. “We like to say we work hard at what we do and [business] comes.”

Nothing fancy about what family-owned CSS makes — springs and stamped and machined parts of varying sizes and applications. But the true money-maker, and the key to those sustainable, long-term customer relationships, is the value-added engineering and production services CSS performs in tandem with them, Stevenson said.

“We build what our customers ask us to build,” he said.

Stevenson won’t disclose revenue or other financials for the closely held outfit, but says, “we make money.”

“We have to spend millions of dollars a year to stay current with equipment and technology, and the customers’ needs, and the facilities as well,” he said.

Indeed, business volume of late is strong enough, he said, that CSS recently spent $750,000 to acquire a new 300-ton stamping press to add to its handful of other heavy presses operating inside one of two production buildings in the Farmington Industrial Park. Just recently, CSS installed a $200,000 parts washer.

On the shop floor, dozens of automated “coilers” hum and clack as they wind and snip various gauge strands of copper and steel into springs of varying dimensions and applications. The copper springs are ideal for one CSS customer’s medical device.

Other, thicker steel springs are used in automobiles or applications where strength and durability are paramount. The company employs about 450 who work in two shifts at a pair of factories adjacent to each other. The largest is the 140,000-square-foot “south” building that opened in the early ’60s; the other is the 52,000-square-foot “north” building that CSS acquired in 2013.

Customers typically don’t come to CSS just to buy finished springs and stampings, Stevenson said. CSS engineers — some 50 or so work there — collect as much information from customers as possible to provide a true value-add to their finished products’ end use.

From there, CSS engineers not only aim to design the best solutions for customers, but take things a step further to design the most precise tooling and production regimen that yields the highest-quality product for them at the lowest cost to CSS, Stevenson said.

It’s that devotion to the “lean” manufacturing process that has enabled CSS to compete in the U.S. and abroad, he said. CSS’s only operation outside the U.S. is a parts warehouse in Puerto Rico. However, it has affiliate relationships with producers in China, Singapore and Taiwan.

CSS, too, embraces what Stevenson describes as a “bottom up” flow of ideas for refining its production processes and quality control. He boasts about how technician Paul Gionfriddo, a 52-year CSS veteran, broached an idea for new tooling for heat-finishing parts that resulted in output vaulting from 1,500 a week, with a 30 percent rejection rate, to 1,500 per day, with zero losses.

Companywide, CSS workers operate as 28 largely self-directed teams. An assignment board on the shop floor lists all scheduled work orders, with milestone deadlines culminating in the final customer-delivery date.

Once they have their assignments, each team is responsible for ensuring quality and meeting deadlines. But they also are imbued by CSS with flexibility to make adjustments along the way, to ensure quality and timeliness. Management, Stevenson said, functions to provide teams with the resources they need to perform.

“The people that do the work know what’s right, what’s wrong,” Stevenson said.

CSS started in Hartford, when co-founders Bert Youmans and Stanley Fischer opened doors in late 1939, at 618 Capitol Ave. Just a spring maker then, its early customers included Royal Typewriter, which had a Hartford plant, and General Electric. Youmans reportedly bought out his partner in 1963, and his family has owned CSS outright since, Stevenson said.

In 1953, CSS relocated to 1841 Broad St., then in 1960, made its final move, to the Farmington Industrial Park that Youmans and Fischer co-developed, Stevenson said. That tie is reflected in the company’s 48 Spring Lane address.

Like other Connecticut manufacturers, he said CSS toils to hire promising, young manufacturing talent, while also trying to retain as many of the most productive, seasoned skilled workers as possible.

It, too, regularly receives relocation overtures from other states, but so far it has resisted them.
“We’re not leaving,” said Stevenson, a Connecticut native who was part owner of a Middletown manufacturer from 1990 to 2000, now owned by Swiss conveyor-belt maker Habasit Abt Inc., before taking the CSS reins in 2000. “It’s not happening.”

Not only are most of its customers based in the Northeast, the challenges of relocating staff and recruiting in a new site make a move problematic, he said.

“We can manufacture parts in Connecticut,” Stevenson said. “We just have to stay focused.”