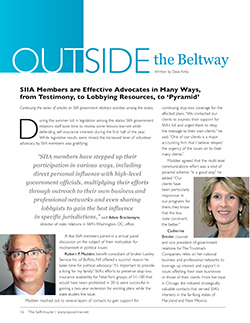 SIIA Members are Effective Advocates in Many Ways, From Testimony, to Lobbying Resources, to ‘Pyramid’

Continuing the series of articles on SIIA government relations activities among the states.

Dring the summer lull in legislation among the states, SIIA government relations staff took time to review some lessons learned while While legislative results were mixed, the increased level of volunteer advocacy by SIIA members was gratifying.

“SIIA members have stepped up their participation in various ways, including direct personal influence with high-level government officials, multiplying their efforts through outreach to their own business and professional networks and even sharing lobbyists to gain the best influence in specific jurisdictions,” said Adam Brackemyre, director of state relations in SIIA’s Washington, DC, office.

A few SIIA members joined in a virtual panel discussion on the subject of their motivation for involvement in political issues:

Robert P. Madden, benefit consultant of broker Lawley Service Inc. of Buffalo, NY, offered a succinct reason he takes time for political advocacy: “It’s important to provide a living for my family.” SIIA’s efforts to preserve stop-loss insurance availability for New York groups of 51-100 that would have been prohibited in 2016 were successful in gaining a two-year extension for existing plans while the state studies the issue.

Madden reached out to several layers of contacts to gain support for continuing stop-loss coverage for the affected plans. “We contacted our clients to express their support for SIIA’s bill and urged them to relay the message to their own clients,” he said. “One of our clients is a major accounting firm that I believe relayed the urgency of the issues on to their many clients.”

Madden agreed that the multi-level communications effort was a kind of pyramid scheme. “In a good way,” he added. “Our clients have been particularly responsive. In our programs for them, they know that the less state constraint, the better.”

Catherine Bresler, counsel and vice president of government relations for The Trustmark Companies, relies on her national business and professional networks to leverage up interest and support in issues affecting their own businesses or those of their clients. From her base in Chicago she initiated strategically valuable contacts that served SIIA’s interests in the far-flung states of Maryland and New Mexico.

“Currently, SIIA is the only self-insurance trade association representing stop-loss carriers specific to the interests of employee health benefit plans,” is how she explains her continuing involvement in SIIA legislative and regulatory issues.”

In Maryland, her network contacts were the basis of communications to brokers and their clients to oppose legislation that would have hampered stop-loss programs with inordinately high attachment points. That bill was scaled back to a compromise level and existing stop-loss plans may be maintained at current levels. A state study of stop-loss insurance that will include SIIA members’ input is due for completion next year.

In New Mexico, Catherine was instrumental in enlisting an influential local business leader who helped head off a regulation that would have required self-insured plans to meet all ACA coverage mandates.

“Government relations is at best a matter of teamwork,” Bresler says. “Nobody has to act alone. It’s invaluable to have local employers testifying and meeting with government figures and to utilize local lobbyists.”

Philip Healy, president of the Automobile Wholesalers Association of New England, was influential in helping to end a New Hampshire legislative threat that would have raised stop-loss insurance attachment points. His letter to the chairman of the pivotal New Hampshire House committee aided the favorable result of the bill’s withdrawal.

Healy, a member of the SIIA PAC governing committee, believes the organization could be even more effective in state capitals as well as Washington if it could bring a greater number of self-insuring employers into grassroots advocacy.

“Actual employers of representatives’ constituencies will have far greater effect than our industry’s service providers,” he said. “It’s fine to have our current members testify on bills and issues but it would be even more effective to bring the benefits managers of soft drink companies and auto manufacturers.”

Brooks Goodison, president of The Diversified Group TPA, became involved in political advocacy when Connecticut first required state licensing for TPAs. “Then we were on their radar screens,” he says. At present, Brooks says the state has followed a confusing strategy of looking to TPAs as a tax revenue source while also treating them as a threat to the ACA exchange.

“At the end of the day the most frightening thing is that legislators generally don’t have an idea what we do or how we serve the business community,” he says. “If no one is there to express the contrary view they just go ahead with free rein to establish unfair and damaging laws.”

SIIA shared in working with Diversified’s lobbying firm on the New York stop-loss bill, benefiting from its local position and knowledge of the issue. “SIIA has been huge in stepping up its government relations activity on the state level,” Goodison notes, adding that the more people who get involved in grassroots advocacy, the better. “We can only hope that examples by the activists stimulate people to do their part in their own backyards.”

Jay Ritchie, senior vice president of HCC Life, a medical stop-loss insurance company, has the benefit of the long view of SIIA government relations. He has been active for more than a decade including former leadership of the Government Relations Committee and the SIIA PAC and now sits on the Board of Directors. He believes the increased participation and effectiveness of members’ political advocacy is a reflection of SIIA’s momentum in the political arena.

“The SIIA brand has gained in significance and people want to be part of that,” he said. “Our members are saying ‘we want the organization to lead and we’ll help,’ rather than asking what SIIA can do for them.

“A big part of that momentum is SIIA’s increased credibility that members’ money will be put to good use. That radiates from the staff ’s continual gains in knowledge and effectiveness – it’s a real example of maturity of an advocacy organization.”