A recent Notes article from Employee Benefit Research Institute (ebri.org) examines 1996-2015 trends in self-insured health plans among private-sector establishments offering health plans and among their covered workers, with a particular focus on 2013 to 2015, so as to assess whether the Affordable Care Act (ACA) might have affected these trends. The data comes from the Medical Expenditure Panel Survey Insurance Component (MEPS-IC).

Here are the key findings from the Employee Benefit Research Institute (EBRI):

Employment-based health plans generally fall into one of two categories―fully insured plans or self-insured plans. The key distinction is whether the employer has decided to purchase an insurance contract to cover the costs and financial risks associated with its employee health plan, or to use its own funds, including funds that might be set aside in a separate trust maintained by the employer (e.g., a voluntary employee beneficiary association) to cover such costs. Employers offering self-insured plans often purchase stop-loss coverage from an insurance company to mitigate against higher-than-budgeted expenses. Different experts may have different views about how any particular health plan should be classified, especially when plans include a flexible spending account (FSA), health reimbursement arrangement (HRA) or health savings account (HSA) that is funded separately from the main health plan.

The fully insured/self-insured distinction is also important from a legal perspective. Under the federal Employee Retirement Income Security Act of 1974 (ERISA), which provides the legal framework for the uniform provision of health benefits by employers doing business anywhere in the country, state laws (other than insurance laws) are generally pre-empted. This means, for example, that self-insured health plans do not have to satisfy state health insurance laws, including state-mandated reserve, benefit, claims, premium, and other requirements, which results in ease of administration and lower expenses. In contrast, fully insured plans are required (among other things) to cover state-mandated benefits and pay state insurance premiums. Both fully insured and self-insured health plans may have to comply with other federal laws applicable to such plans, such as components of the Affordable Care Act of 2010 (ACA).

Since the passage of the ACA, some commentators have speculated that an increasing number of small and midsized employers would convert their health plans from fully insured to self-insured plans.1 The rationale has appeared to be that several of the key ACA components—creditable coverage, affordability, essential benefits, and various taxes and fees—would drive up the cost of health coverage, thus possibly making self-insurance (which is viewed by many as generally less expensive than fully-insured alternatives) a more attractive option for many employers.

This EBRI Notes article examines recent trends in self-insured health plans among private-sector establishments and workers based on data from the Medical Expenditure Panel Survey Insurance Component (MEPS-IC). Data are presented in the aggregate and by establishment size. (2) 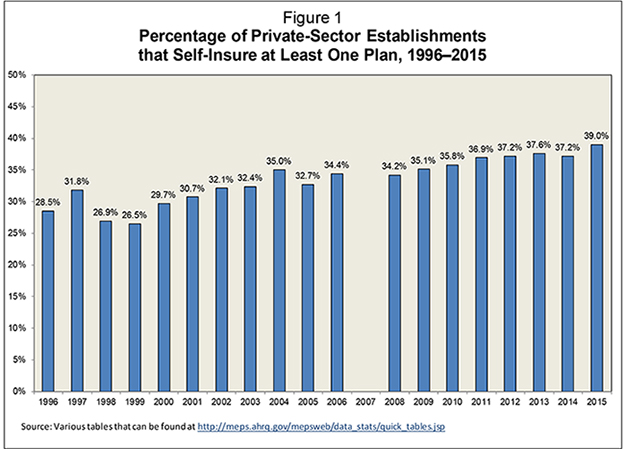 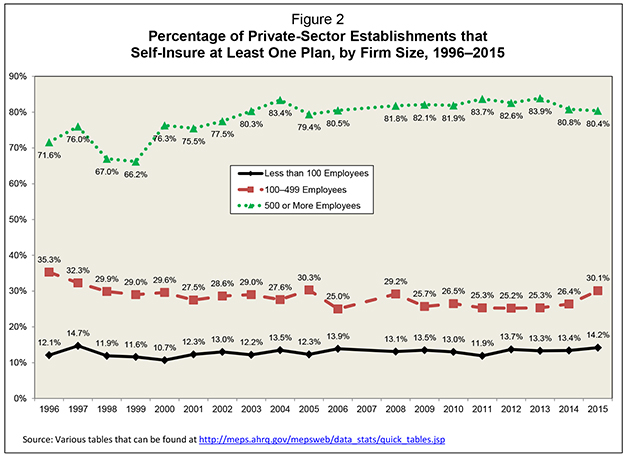 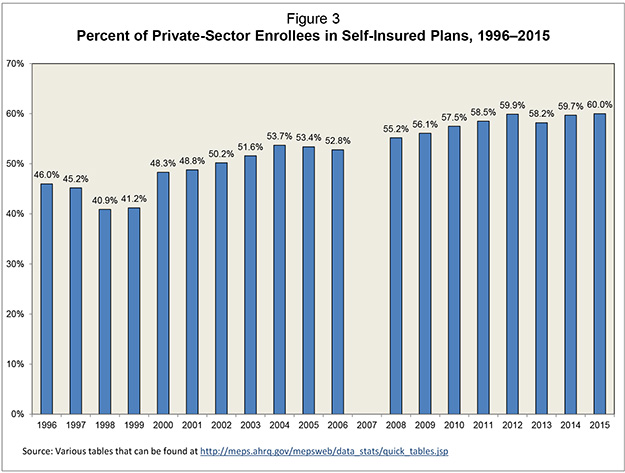 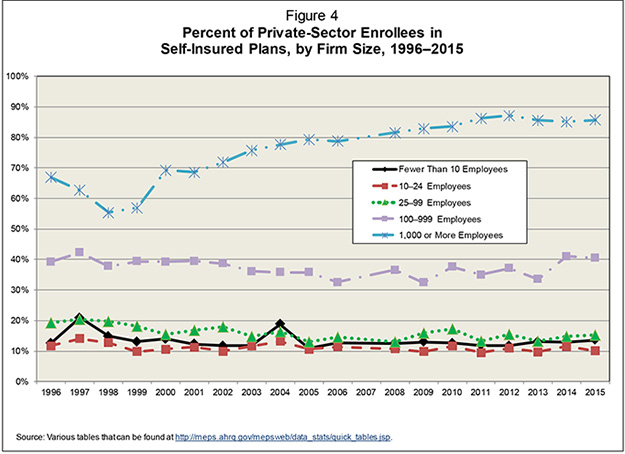 Endnotes
1. See, for example, comments made at the 2015 Sun Life Financial Wake Up Summit: http://www.sunlifesummit.com/, http://www.benefitspro.com/2013/08/06/self-insurance-a-threat-to-obamacare, and http://www.commonwealthfund.org/~/media/Files/Publications/Issue%20Brief/2012/Nov/1647_Buettgens_small_firm_self_insurance_under_ACA_ib.pdf

2. Self-reported data were examined from the Medical Expenditure Panel Survey Insurance Component (MEPS-IC), which is a survey of private- and public-sector employers fielded by the U.S. Census Bureau for the Agency for Healthcare Research and Quality (AHRQ). The survey has been fielded annually since 1996 (with the exception of 2007). Note that the survey collects data from private establishments, which consist of a single physical location. It is possible that some large employers are over-represented in the survey if more than one location was surveyed. Nearly 40,000 establishments were interviewed in 2015. See https://meps.ahrq.gov/mepsweb/survey_comp/ic_sample_size.jsp for more information.

3. Between 1996 and 1998, the share of self-insured workers for large employers dipped from 68.1 percent to 55.4 percent, but has steadily increased since then. 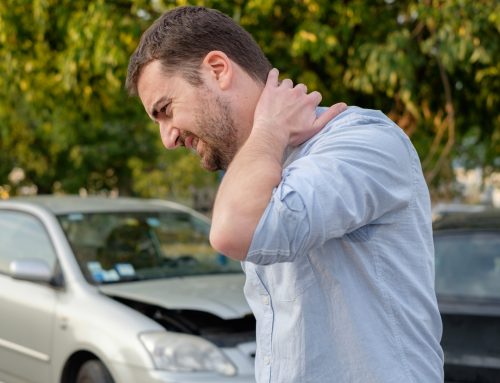