The article below is from Kaiser Health News written by Emily Kopp and Rachel Bluth April 19, 2017.

A nonprofit organization that has orchestrated a wide-reaching campaign against foreign drug imports has deep ties to the Pharmaceutical Research and Manufacturers of America, or PhRMA, the powerhouse lobbying group that includes Eli Lilly, Pfizer and Bayer.

A PhRMA senior vice president, Scott LaGanga, for 10 years led the Partnership for Safe Medicines, a nonprofit that has recently emerged as a leading voice against Senate bills that would allow drug importation from Canada. LaGanga was responsible for PhRMA alliances with patient advocacy groups and served until recently as the nonprofit’s principal officer, according to the partnership’s tax forms. 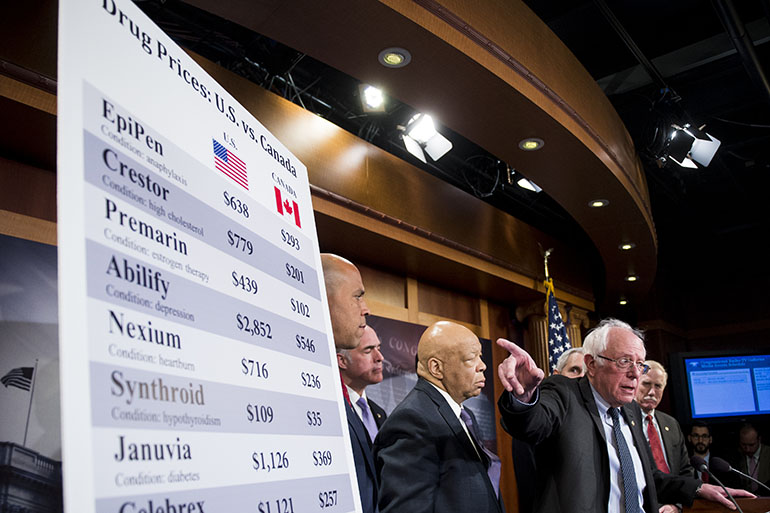 In February, LaGanga moved to a senior role at PhRMA and stepped down as executive director of the Partnership for Safe Medicines — just as the group’s campaign to stop import legislation was revving up.

Both PhRMA and the partnership have gone to great lengths to show that drugmakers are not driving what they describe as a “grass-roots” effort to fight imports — including an expensive advertising blitz and an event last week that featured high-profile former FBI officers and a former Food and Drug Administration commissioner.

The partnership’s new executive director, Shabbir Safdar, said LaGanga resigned from the group to avoid the appearance of a conflict of interest.

“That’s why Scott’s not executive director anymore,” he said. PhRMA declined to make LaGanga available for an interview.

The Senate push to allow Americans to buy pharmaceuticals from Canada comes as more patients balk at filling prescriptions because of soaring drug prices. Prescription medicines purchased in the U.S. can run three times what they cost in Canada, data from the company PharmacyChecker.com show. In 2016, about 19 million Americans purchased pharmaceuticals illegally from foreign sources through online pharmacies or while traveling, according to a Kaiser Family Foundation poll; many survey respondents cited pricing disparities as the reason.

The U.S. drug industry has strongly opposed efforts to open the borders to drug imports, but PhRMA is not mentioned in the partnership’s recent advertising blitz. The nonprofit said its grass-roots effort is supported by 170 members, including professional organizations and trade groups.

The nonprofit describes PhRMA as a dues-paying member with no larger role in shaping the group’s activities. Partnership spokeswoman Clare Krusing would not say how much each member contributes. PhRMA spokeswoman Allyson Funk declined to say whether PhRMA funds the partnership.

“PhRMA engages with stakeholders across the health care system to hear their perspectives and priorities,” Funk said. “We work with many organizations with which we have both agreements and disagreements on public policy issues, and believe engagement and dialogue are critical.”
LaGanga is listed as the nonprofit’s executive director on each of the partnership’s annual tax filings since 2007, the earliest year for which they are available from ProPublica’s Nonprofit Explorer.

LaGanga wrote a 2011 article about the partnership’s origins. Published in the Journal of Commercial Biotechnology, it described “public-private partnerships in addressing counterfeit medicines.” His PhRMA job was not disclosed.

From 2010 to 2014, the organization hosted a conference called the Partnership for Safe Medicines Interchange. At a 2013 event posted to YouTube, LaGanga thanks pharmaceutical companies for sponsoring the event, most of them PhRMA members.

The partnership recently launched its ambitious ad campaign — including television commercials, promoted search results on Google and a full-page print ad in The Washington Post and The Hill. The group’s YouTube page shows recent commercials targeted to viewers in 13 states.

“We don’t disclose specific ad figures, but the campaign is in the high six figures,” Safdar said.

The campaign warns against the alleged dangers of legalizing Canadian drug imports. The commercials ask voters to urge their senators to “oppose dangerous drug importation legislation.”

The newspaper ad reads, “Keep the nation’s prescription drug supply safe. Urge the Senate to reject drug importation measures.” Its splash headline declares that “170 healthcare advocacy groups oppose drug importation,” touting a letter to Congress signed by its many members. It lists 160, and PhRMA’s name is not included.

“Having a big membership allows the coalition to present what looks like a unified show of grass-roots support … but it does raise questions about which members of the coalition are really driving and funding the group’s policymaking,” said Matthew McCoy, a postdoctoral fellow at the University of Pennsylvania who studies patient advocacy groups.

One group that signed the letter, the “Citrus Council, National Kidney Foundation of Florida Inc,” represents a single volunteer, according to an email from the group. A spokesman for the National Kidney of Foundation of Florida said the volunteer’s views contradict the position of the umbrella group, and said the foundation supports “any sort of drug importation that allows our patients to have access to drugs at the best price.”

“I don’t enjoy having to take this extreme position of saying we shouldn’t import at all, but until we have some oversight regime, some way of protecting consumers, it’s a really tough call,” he said in an interview.

“Current drug importation proposals do not appear to have equal safety and chain-of-custody accountability laid out adequately for patient safety concerns,” said William Arnold, president of the Community Access National Network, an advocacy and support group for people living with HIV/AIDS or hepatitis in Washington, D.C. His group did not accept money from PhRMA from 2013 to 2015.

“You can talk about lowering prices, but if a drug comes with a high probability of toxicity and death, that comes at a high cost to the patient,” von Eschenbach said. “That’s what’s at issue with drug importation.”

Each speaker argued that the bill co-sponsored by Sen. Bernie Sanders (I-Vt.) would be harmful to patients. That legislation would provide a mechanism for Canadian drug manufacturers to sell to U.S. consumers and pharmacies. Sanders introduced the bill in February. Around the same time, the partnership sent emails to member organizations seeking help to stop such a measure.

In the House, Rep. Elijah Cummings (D-Md.) introduced a similar bill to Sanders’, along with 23 other Democrats. In January, Sens. John McCain (R-Ariz.) and Amy Klobuchar (D-Minn.) also introduced a bill to allow drug imports from Canada.

Speakers at the partnership event claimed importation would lead to a flood of counterfeit medicines laced with arsenic, fentanyl and lead paint.

“These drugs are manufactured in jungles, in tin drums, in basements … those are the sort of sanitary conditions we’re talking about here,” said George Karavetsos, a former director of the FDA’s Office of Criminal Investigations.

Josh Miller-Lewis, Sanders’ deputy director of communications, refuted those arguments in an interview. He said Canadian drugmakers can apply for licenses, and all drugs would have to come from FDA-inspected plants.

This isn’t Sanders’ first attempt to legalize importation. But Politico reported in October that PhRMA is bolstering its war chest by another $100 million a year, suggesting to many industry watchers that drugmakers are gearing up for a ferocious fight.

“I think it’s safe to say pharmaceutical corporations are prepared to spend some fraction of their multibillion-dollar profits to fight drug importation and any other policy that might end the plague of overpriced medicine,” said Rick Claypool, research director for Public Citizen, a watchdog group critical of the drug industry.