The May, 2016 issue of The Self-Insurer magazine, Outside the Beltway article discusses how various states – and agencies within states – are challenging self-insured plans through claims tax schemes, limits on stop-loss insurance, demands for propriety data and other burdens. 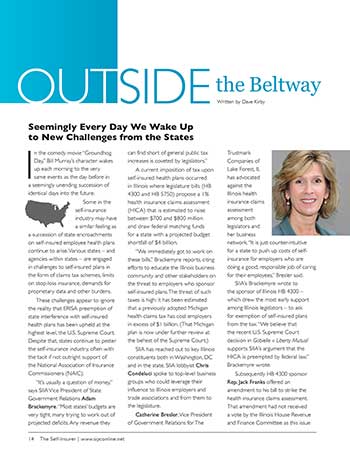 Below you will find an excerpt from the article that features Brooks’ comments as quoted in the The Self-Insurer article, “Seemingly Every Day We Wake Up to New Challenges from the States,” as well as a link to view the entire article written by Dave Kirby.

In the comedy movie “Groundhog Day,” Bill Murray’s character wakes up each morning to the very same events as the day before in a seemingly unending succession of identical days into the future.

Some in the self-insurance industry may have a similar feeling as a succession of state encroachments on self-insured employee health plans continue to arise. Various states – and agencies within states – are engaged in challenges to self-insured plans in the form of claims tax schemes, limits on stop-loss insurance, demands for proprietary data and other burdens.

These challenges appear to ignore the reality that ERISA preemption of state interference with self-insured health plans has been upheld at the highest level, the U.S. Supreme Court. Despite that, states continue to pester the self-insurance industry, often with the tacit if not outright support of the National Association of Insurance Commissioners (NAIC).

“It’s usually a question of money,” says SIIA Vice President of State Government Relations Adam Brackemyre. “Most states’ budgets are very tight, many trying to work out of projected deficits. Any revenue they can find short of general public tax increases is coveted by legislators.”

The cost of states’ interference with self-insurance is a burden shared by employers and TPAs alike. Naturally, taxes on health claims revert to employers but there are also in-state demands by various agencies that accrue financial and administrative costs, according to Brooks Goodison, president of Diversified Group TPA in Marlborough, CT.

We have to pass on costs of collecting fees such as the New York and Massachusetts Public Goods Surcharge or fees for childhood immunization in Connecticut, New Hampshire and Maine. And we have administrative costs that provide no value to our clients,” Goodison said.

“In some states we may have three or even four different agencies demanding data from us for various purposes such as studies of outcomes-based payment plans, penetration of childhood immunization, incentive-based payment systems or taxes on claims,” Goodison said. “For any of these purposes we are required by law to report data that’s not ours to give. But states find it convenient to come to TPAs to gather aggregate data rather than take the trouble to contact individual employers.”

Click to read the entire article as seen in the May issue of The Self-Insurer magazine.