This article appeared on Kaiser Family Foundation on September 19, 2017.

Premiums for family coverage have increased 19% since 2012 and 55% since 2007. Average premiums for high-deductible health plans with a savings option (HDHP/SOs) are considerably lower than the overall average for all plan types for both single and family coverage, at $6,024 and $17,581, respectively [Figure A]. These premiums do not include any firm contributions to workers’ health savings accounts or health reimbursement arrangements. 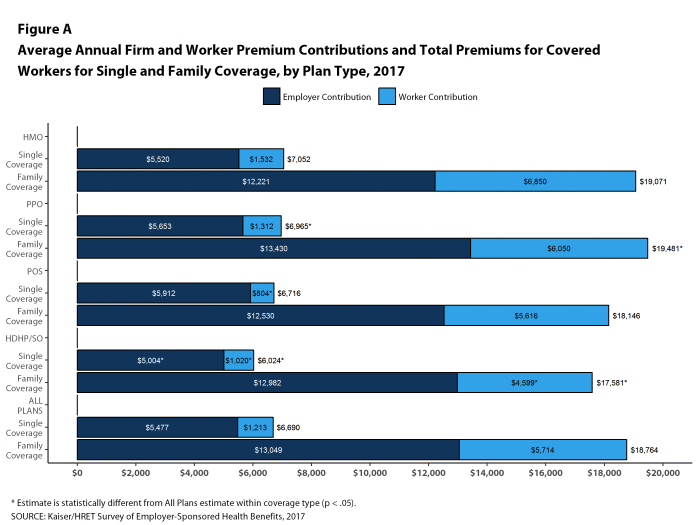 Figure A: Average Annual Firm and Worker Premium Contributions and Total Premiums for Covered Workers for Single and Family Coverage, by Plan Type, 2017

PPOs continue to be the most common plan type in 2017, enrolling 48% of covered workers. Twenty-eight percent of covered workers are enrolled in a high-deductible plan with a savings option (HDHP/SO), 14% in an HMO, 10% in a POS plan, and <1% in a conventional (also known as an indemnity) plan [Figure D]. Over the last five years, enrollment in PPOs has fallen by 8 percentage points while enrollment in HDHP/SOs has increased by 9 percentage points. Six percent of firms offering an HDHP/SO offer only an HDHP/SO to at least some of their workers. 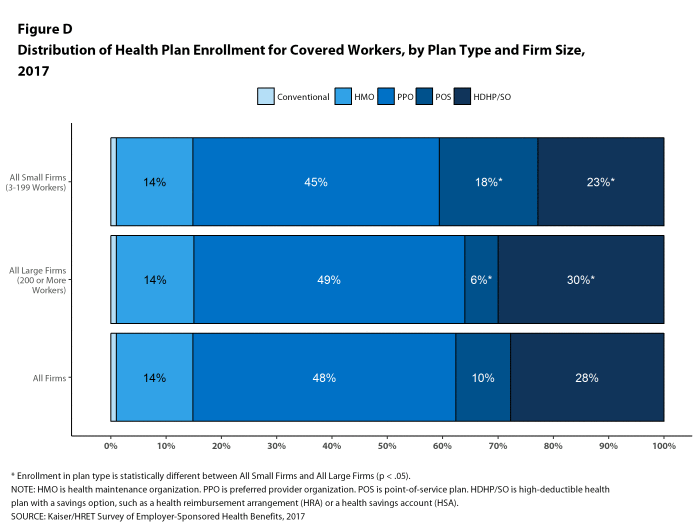 Self-Funding. Fifteen percent of covered workers in small firms and 79% in large firms are enrolled in plans that are either partially or completely self-funded, similar to last year. Although there has been discussion of more insurers offering partially self-funded plans (sometimes called level-premium plans) to smaller employers, we have not seen an increase in respondents reporting that they have self-funded plans in recent years.

Most covered workers must pay a share of the cost when they use health care services. Eighty-one percent of covered workers have a general annual deductible for single coverage that must be met before most services are paid for by the plan [Figure E]. Even workers without a general annual deductible often face other types of cost sharing when they use services, such as copayments or coinsurance for office visits and hospitalizations. 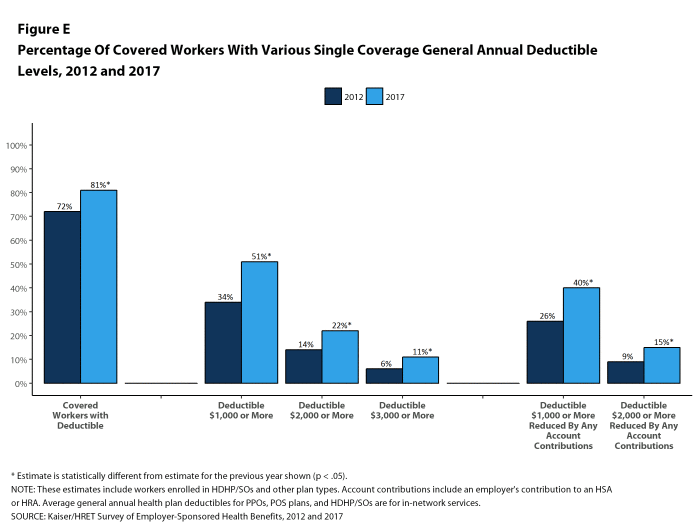 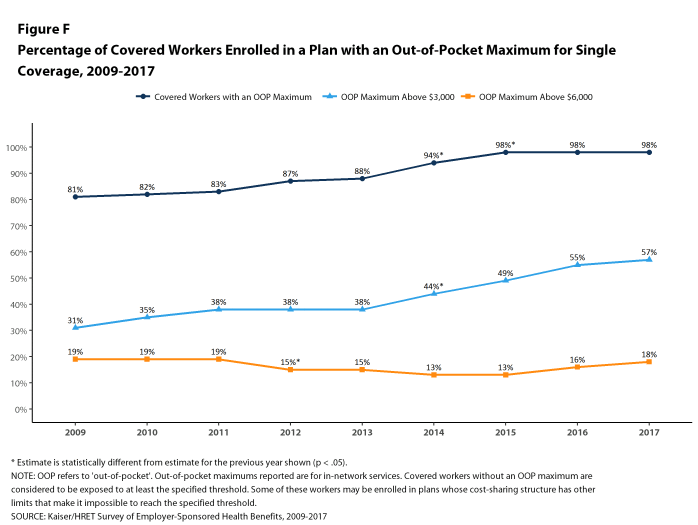 Figure F: Percentage of Covered Workers Enrolled In a Plan With an Out-Of-Pocket Maximum for Single Coverage, 2009-2017

The likelihood of offering health benefits differs significantly by firm size, with only 40% of firms with 3 to 9 workers offering coverage while virtually all firms with 1,000 or more workers offer coverage.

Even in firms that offer health benefits, some workers are not eligible to enroll (e.g., waiting periods or part-time or temporary work status) and others who are eligible choose not to enroll (e.g., they feel the coverage is too expensive or they are covered through another source). In firms that offer coverage, 79% of workers are eligible for the health benefits offered, and of those eligible, 78% take up the firm’s offer, resulting in 62% of workers in offering firms enrolling in coverage through their employer. All of these percentages are similar to 2016.

Looking across workers both in firms that offer and those that do not offer health benefits, 55% of workers are covered by health plans offered by their employer. 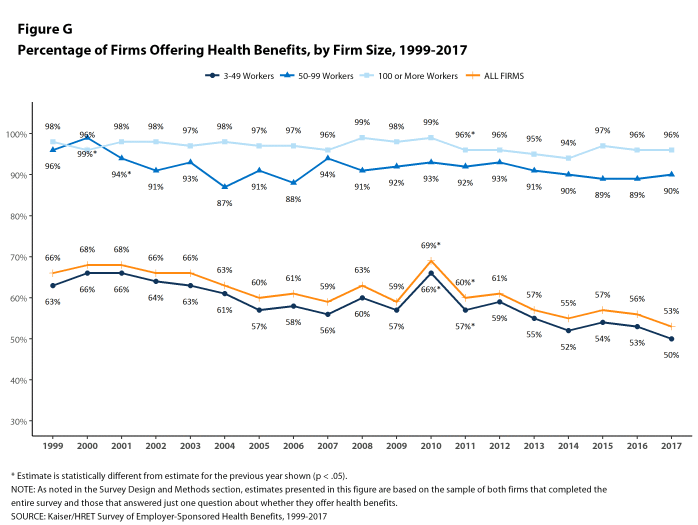 A large share of firms have programs that encourage workers to identify health issues and to take steps to improve their health. Many firms offer health screening programs including health risk assessments, which are questionnaires asking workers about lifestyle, stress or physical health, and in-person examinations such as biometric screenings. Many firms also use incentives to encourage workers to complete assessments, participate in wellness programs, or meet biometric outcomes. As we have seen in previous years, there is considerable uncertainty among small firms on some questions, particularly those related to incentives, so findings are reported only for large firms in some instances.

Health and Wellness Promotion Programs. Many firms offer programs to help workers identify health risks and unhealthy behaviors and improve their lifestyles. Fifty-eight percent of small firms and 85% of large firms offer a program in at least one of these areas: smoking cessation; weight management; behavioral or lifestyle coaching. Thirty-two percent of large firms with one of these health and wellness programs offer workers an incentive to participate in or complete the program. Among large firms with an incentive for completing wellness programs, incentives include: gift cards, merchandise or similar incentives (68% of firms); requiring completion of activities to be eligible for other wellness incentives (44% of firms); financial rewards such as cash, contributions to health-related savings accounts, or avoiding a payroll fee (37% of firms); and lower premium contributions or cost sharing (19% of firms).

Eight percent of small firms and 14% of large firms report collecting health information from workers through wearable devices such as a Fitbit or Apple Watch. 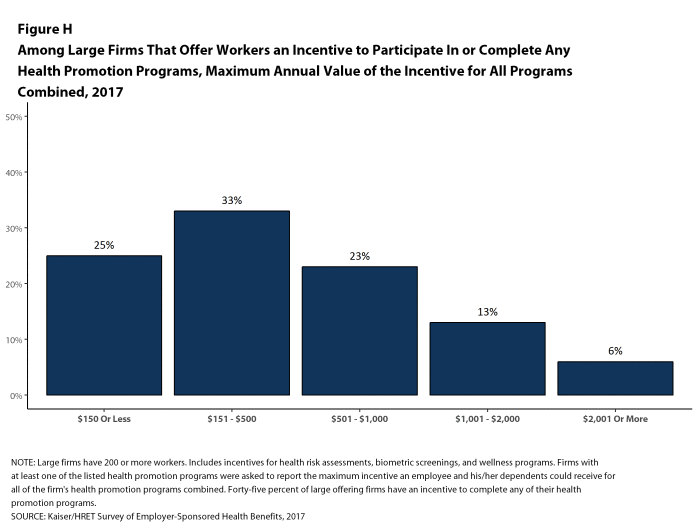 Figure H: Among Large Firms That Offer Workers an Incentive to Participate In or Complete Any Health Promotion Programs, Maximum Annual Value of the Incentive for All Programs Combined, 2017

Telemedicine. Sixty-three percent of large firms that offer health benefits cover the provision of health care services through telecommunication in their largest health plan [Figure I]. Among these firms, 33% reported that workers have a financial incentive to receive services through telemedicine instead of visiting a physician’s office.

Retail Health Clinics. Seventy-three percent of large firms cover services offering health benefits provided in retail health clinics, such as those found in pharmacies and supermarkets, in their largest health plan [Figure I]. Among these firms, 17% reported that workers have a financial incentive to receive services in a retail clinic instead of visiting a traditional physician’s office.

Nurse Hotline. Seventy-nine percent of large firms offering health benefits have a nurse hotline as part of their largest health plan [Figure I].

High Performance or Tiered Networks. Fifteen percent of large firms offering health benefits have high performance or tiered networks in their largest health plan, similar to the percentage reported last year [Figure I]. These programs identify providers that are more efficient and generally provide financial or other incentives for enrollees to use the selected providers.

Narrow Networks. Nine percent of large firms offering health benefits offer a health plan that they consider to have a narrow network (i.e., a network they would consider more restrictive than a standard HMO network), similar to the percentage reported last year [Figure I].

Eliminated Hospitals or Health Systems. Only 3% of large firms report that they or their health plan eliminated a hospital or health system in the past year in order to reduce the costs of their plan, similar to the percentage reported last year [Figure I]. 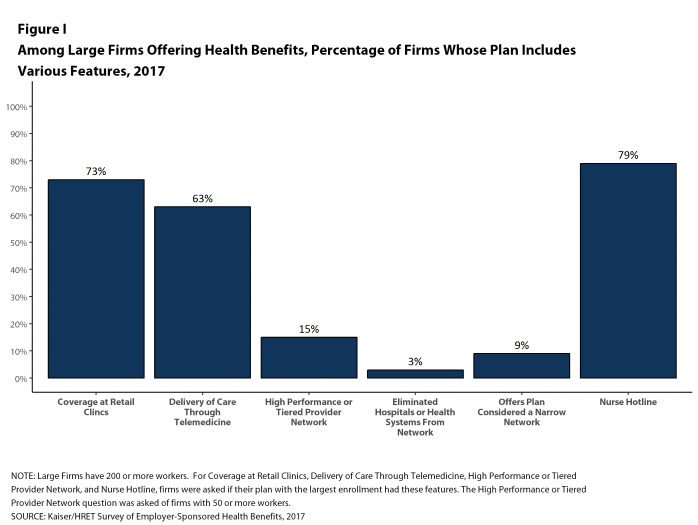 The market for employer-sponsored health benefits continues along with no big changes in 2017. Premium increases are modest and there is no appreciable change in cost sharing or enrollment by type of plan. Employers continue to invest in health promotion and wellness approaches, including building incentives around programs that collect information about employee health and lifestyles.

Despite continuing economic improvement, with lower rates of unemployment, and the ACA employer mandate, there are no signs that the long-term declines in the offer and coverage rates are reversing. Even with modest premium growth, offer rates for small firms remain much lower than those for large firms, and the percentage of workers covered at work remains at 62%.

We continue to see significant variation around the average premiums and contribution amounts, particularly for small businesses. A meaningful share of covered workers in small firms must pay a substantial share of the cost of family coverage, raising the question of whether this is a viable source of coverage for the dependents of these workers.

The debate about the future of the ACA has focused on the provisions that extended coverage in the non-group market and Medicaid, with the provisions affecting employer-sponsored coverage receiving relatively little attention. Employers generally appear to have adapted to ACA provisions without significant disruption, including the employer requirement to offer coverage or pay a penalty, the provisions requiring preventive care be covered without cost sharing, and that non-grandfathered plans have an out-of-pocket limit on cost sharing. Even if repeal and replace efforts ultimately succeed, the impacts on the group market will likely be relatively small: for example, some employers may reduce offers of coverage to some of their lower-paid employees or may reduce the number of preventive services available without cost sharing; but the larger metrics measuring costs and coverage are unlikely to change in any significant way.

One policy that could affect the market over the next couple of years is the high-cost plan tax, also known as the Cadillac tax. In previous surveys, employers reported increasing cost sharing and making other changes in anticipation of the high-cost plan tax taking effect in 2018. With the effective date of the tax delayed until 2020 (and with the apparent widespread Congressional support for further delay), the pressure for employers with more expensive plans to take actions to reduce their cost seems to have abated. This could change abruptly, however, if the tax is not further delayed in the near future.

The Kaiser Family Foundation/Health Research & Educational Trust 2017 Annual Employer Health Benefits Survey (Kaiser/HRET) reports findings from a telephone survey of 2,137 randomly selected non-federal public and private employers with three or more workers. Researchers at the Health Research & Educational Trust, NORC at the University of Chicago, and the Kaiser Family Foundation designed and analyzed the survey. National Research, LLC conducted the fieldwork between January and June 2017. In 2017, the overall response rate is 33%, which includes firms that offer and do not offer health benefits. Among firms that offer health benefits, the survey’s response rate is also 33%. To improve estimates for small firms, the 2017 survey had a significantly larger sample than previous years; the increased sample size lead to both more firms completing the survey and a lower response rate than in years past. Unless otherwise noted, differences referred to in the text and figures use the 0.05 confidence level as the threshold for significance.

For more information on the survey methodology, please visit the Methodology section at http://ehbs.kff.org/.